Warning: "continue" targeting switch is equivalent to "break". Did you mean to use "continue 2"? in /home/triumphantradio/public_html/wp-content/plugins/essential-grid/includes/item-skin.class.php on line 1231
 Open Heavens by Pastor E.A Adeboye... VICTORY IN HOLINESS – Thursday April 7th 2016 - Triumphant Radio

VICTORY IN HOLINESS
Memorise: Righteousness exalteth a nation: but sin is a reproach to any people.
Proverbs 14:34
Read: Daniel 6:19-23, 19 At the first light of dawn, the king got up and hurried to the lions’ den. 20 When he came near the den, he called to Daniel in an anguished voice, “Daniel, servant of the living God, has your God, whom you serve continually, been able to rescue you from the lions?”
21 Daniel answered, “May the king live forever! 22 My God sent his angel, and he shut the mouths of the lions. They have not hurt me, because I was found innocent in his sight. Nor have I ever done any wrong before you, Your Majesty.”
23 The king was overjoyed and gave orders to lift Daniel out of the den. And when Daniel was lifted from the den, no wound was found on him, because he had trusted in his God. 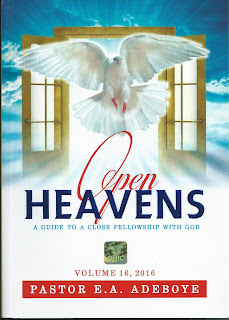 Bible in one year: 1st Samuel 17:1-18:16, Proverbs 6:16-27
There is victory in holiness. This is a fact that many do not know of and their ignorance makes them continue to live as fake Christians. When the eyes of a child of God are opened to this revelation, he will not wait for any Pastor to preach so much before he begins to live righteously and faithfully to honour his Lord and Saviour. Our memory verse for today presents a two-edged sword of the truth: while righteousness exalts a nation, sin or unrighteousness brings reproach that comes in form of defeat (Proverbs 14:34).
The story of Daniel in the text for today is highly revealing. The first thing one should notice is that righteousness or holy living is not a hidden thing. It is something that the one who is living such a life can and must exhibit with every sense of humility. Daniel said: “My God hath sent his angel, and hath shut the lion’s mouths, that they have not hurt me: forasmuch as before him innocence was found in me; and also before thee, O king, have I done no hurt.” There is victory in holy living and Daniel confirmed this in Daniel 6:22
To some people, the testimony of Daniel may sound arrogant, but the question is, was Daniel saying the truth when he said that he did no evil against the earthly kingdom and the kingdom of heaven? The outcome of the persecution gives the accurate answer. The Bible says:
“Follow peace with all men, and holiness without which no man shall see the Lord.”
Hebrew 12:14
At times, some Christians who do not believe in holiness feign humility by saying it is impossible for mere humans, to live holy. Like I always tell my children in the Redeemed Christian Church of God, the fact that you are not living by the Bible does not mean others are not. The Bible says:
“Little children, let no man deceive you: he that doeth righteousness is righteous, even as he is righteous. He that committeth sin is of the devil, for the devil sinneth from the beginning. For this purpose the Son of God was manifested, that he might destroy the works of the devil.”
1st John 3:7-8
As a matter of fact, you either holy or sinful and no sinner will make it to heaven. For this reason, Jesus came to destroy the works of the devil in our lives. You are righteous by grace. This grace is why we must never boast because it is not you but Christ that lives in you. I encourage someone using this devotional to pray earnestly for the grace to live holy. Daniel triumphed over all his administrative and political enemies. They perished in his stead because of holiness! I pray for a reader of this devotional, the grace to live holy will come upon you today and you will henceforth live a daily victorious life in Jesus’ name.
Prayer Point
Father, please help me live a life of obedience to Your Word so that I may be holy unto You.