Do you know your neighbors? I’m asking about the people who live immediately to your right and your left, maybe across the street or beyond your backyard or across the hall. If you can name them, the statistics suggest that this knowledge sets you apart in today’s America.

But how much do you really know about them?

What do they do for work? What do they like to do on the weekends? What matters most to them? What makes them happy? What are their fears, their struggles? What’s the most significant thing that happened to them in the last year? What do they think about Jesus?

For all that technology has accomplished in connecting us with people all over America and even around the world, it’s built miles of distance between next-door neighbors. Most of us live less than fifty feet from our neighbor’s front door, and yet we couldn’t live further apart. It almost feels like you have to book a flight. Technology — think garage doors, air-conditioning, Amazon, smartphones, and Netflix — has tragically made strangers out of neighbors.

Americans spend significantly less time with their neighbors. In the 1970s, nearly 30 percent of Americans frequently spent time with neighbors, and only 20 percent had no interactions with them. Today, those proportions are reversed.

In 2013, Trulia cited a similar study that looked at dynamics between neighbors in America, concluding that more than half didn’t know their neighbors’ names. 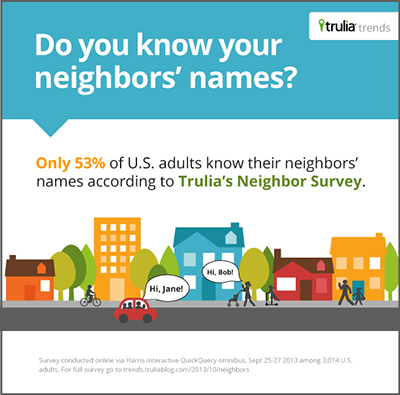 Relationships that used to be normal and natural have become rare and even inconvenient. As a people commissioned by God to “go therefore and make disciples of all nations” (Matthew 28:19), trends toward isolation and away from real, face-to-face friendship should trouble us. These relationships are the highways for the good news, the widest channels for true hope, life, and happiness.

A Plan for Your Neighborhood

God has put you on the planet and in your neighborhood so that you and all the people in your life might seek him. That’s God’s mission statement for your neighborhood, wherever you live and regardless of the number of Christians there. Paul says that God “made from one man every nation of mankind to live on all the face of the earth, having determined allotted periods and the boundaries of their dwelling place, that they should seek God, and perhaps feel their way toward him and find him.” (Acts 17:26–27).

God has determined your dwelling place today — your home, in your neighborhood, in your city, in your state — so that you would seek him and help others do the same. It’s not beyond God to use you to convert someone in a moment on a bus ride or through a random, brief interaction with a stranger at the gym or a coffee shop or the office. But friendships are the front lines of making disciples, and friendship requires some shared interest or hobby or space — a place where paths cross. Even the always-traveling apostle Paul found time for that kind of relational, life-on-life evangelism and discipleship (1 Thessalonians 2:8; Romans 1:11;Philippians 4:1; 2 Timothy 1:4).

Don’t expect people to answer the door the first time you ring the doorbell. Would you? But don’t let that keep you from ringing (or answering), either. They’ll immediately assume you’re selling something. But you’re not, so do not fear. Keeping greeting, keep knocking, keep inviting until they know you’re really only there because you love them. Be the old-fashioned, friendly freak on your block. You may even be surprised how many people around you have been starving for this.

Being an engaged and friendly neighbor ironically will make you seem like a foreigner at first. You’ll be weird. And buried in that weirdness is the unique window through which you witness to Jesus. In that way, even though neighborhood relationships have become more cumbersome, ministry may have become strangely easier, precisely because Christian efforts toward friendship will be all the more strange.

Face-to-face friendship is a lost art that’s critical to loving the lost. When God put you where you are, he wanted you to be a witness to real people. “You will receive power when the Holy Spirit has come upon you, and you will be my witnesses in Jerusalem and in all Judea and Samaria” — and Minneapolis and Houston and your hometown — “and to the end of the earth” (Acts 1:8). Being that kind of witness, in word and in example, will require some kind of consistency over time. It requires a friendship aimed at Jesus’s fame.

It Starts with a Name

Start simple: learn (and remember) their names. Names are a small thing, but a crucial thing. It’s the most basic unit of currency in friendship, but remembering someone’s name says so much about whether you really care or not (and most people in any given neighborhood simply don’t). Write their names down somewhere you’ll see it — like on a prayer list — and pray for them.

As you have more opportunities to talk, ask questions, and try to remember details here and there. You could start with the list above, but don’t box yourself into any one series of questions. Look for what they love to talk about, and walk down that road with them as far as they’ll take you. The real counter-cultural act of love in an attention-famished world like ours is to remember what they told you, and bring it up later on.

Jesus’s test in Luke 6:45 — “Out of the abundance of the heart his mouth speaks” — can be used to expose eviland it can be used to build bridges for the gospel. People talk about what they love. Listen closely, and leverage their loves to lead them to Jesus.

It’s never too late to be a better neighbor. The awkwardness may last a few moments initially, but the results also may endure eternally. Take the next step in their direction — they’re only a few steps away — and trust God will overcome the weaknesses in you, and the brokenness in American society, to draw his own to himself.